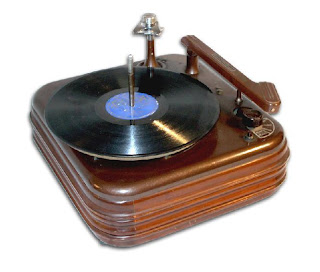 Nostalgia is strange and memories stranger..It is a bit past 5 in the evening..till the clock turns 7..there shall be a sense of slow eternity that crowds into an impending sleep. A sense of waiting, as if watching the little things closing in for the night. There is still light streaming in from some of the delicate curtains in the living room and all of a sudden a song hovering in the mind. For someone from the East, it still surprises me at the amount of light late into the evening.
I was perhaps in lower school, we had a record player that looked a bit like this. Sundays smelt of the mandatory Mutton while Baba would put on a shiny black record on the player and the strains would waft in..The houses in Assam had wooden floors, I remember trying not to step on the odd board that creaked. More than the song it was Baba humming along that I loved listening to..the opening of a tap somewhere..the whistle of a pressure cooker, all while Hemanta sang-

The player would sometimes stop and the pin would stick to one place and keep repeating the same part again and again..I would lift my head from my abstract games behind the curtain, giggle and look at someone walking up to the player to adjust it..sometimes the same song would play again for sometime..with feet creaking on the boards, the humming would be louder..Ma would call from somewhere..stillness in the air was still complete.

Today as I sip my tea and remember the song from childhood I hum it again while I play it on Youtube..things have become simpler..only nostalgia remains inexplicable.

( Image from Google)
Posted by Maitreyee Bhattacharjee Chowdhury at 4:48 AM 4 comments:

Love in the times of Malls 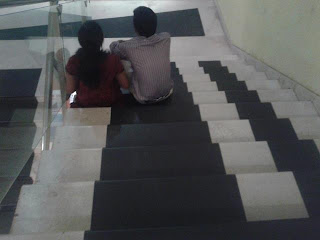 Was dragged by cousins and family to a pre-Bengali New Year lunch and some mall hopping today..In many ways malls feel like Facebook, everyone wants to be seen here( & I'm not excluding myself here) and look at others..people aimlessly wandering around, many a times adjusting their dresses and Ray Ban's wondering if they were being looked at..Women in the toilets pee less, adjust their make up more :)

My take away was this couple I chanced upon on the stairs, completely oblivious to anyone else, laughing and talking animatedly with each other, at times pausing and looking at each other's eyes..I could not help but take a pic from the back( thankfully I did not disturb them, they didn't notice me at all..besides would not have wanted to click their faces). I was reminded of few lines from a book I am reading, 'Asura', when Ravana is asked by his Gurus to kick aside all emotions in order to be the supreme warrior he says of love, ' Without love, without the king of emotions nothing exists..if one has not felt the painful need to be with one's lover..if you have not felt the love of your own, nothing matters...People have died for love in the past, and will continue to do so as long as the world exists. I shall always love. I love because I exist, I exist because I love.'

As for myself I found my love in a lovely hard bound copy of Henry Jame's ' The Portrait of a Lady'..at a terrific discount.

Posted by Maitreyee Bhattacharjee Chowdhury at 10:17 AM 7 comments:

A poem for Mahadevyakka- A.K Ramanujan 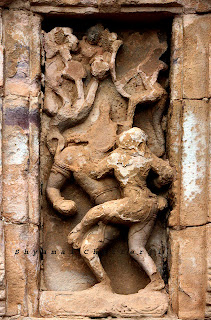 Around the 12 th century, the Bhakti poetry movement spread rapidly in the Southern parts of India. Many of these poets especially those in the Kannada region were worshipers of Shiva. Amongst them was a well known woman poet named, Mahadevyakka. An ardent Shiva worshiper, she is said to have roamed around naked. When people asked her, about her immodesty she replied that, since the Lord had already seen her, she did not care about who else saw her.

A.K Ramanujan translated four such poets from the 12 th century, in his book- 'Speaking of Shiva' ( 1973) For Mahadevyakka however he wrote a special poem in a separate anthology called 'The Black Hen'.

'Keep off when I worship Shiva.
Touch me three times, and you'l never see me again',
said Akka to her new groom
who couldn't believe his ears.

Om Om!
she seemed to intone with every breadth
and all he could think of was her round breast,
her musk, her darling navel and the rest.
So he hovered and touched her, her body deathly

cold to mortal touch, but hot for God's
first move, a caress like nothing on earth.
She fled his hand as she would a spider,

threw away her modesty as the rods
and cones of her eyes gave the world a new birth:
She saw Him then, unborn, form of forms, the Rider,

His white Bull chewing the cud in her backyard.

While I am not sure if the last line was meant to spring a surprise or add that little dash of humour as many of his poems, that end in a surprising twist. But Ramanujan is said to have undergone a tremendous change in his persona while he translated these Kannada poets, who spoke on Shiva.

( The image taken from http://przmm.blogspot.in/2011/06/celebration-of-kama-love-frozen-in.html is a personal favourite of mine, it shows a broken image of Shiva and Shakti in a blissful union under the tree of life. The posture is supposed to resemble a Tantrik Bouddha..somehow the incompleteness of the broken sculpture seems to add to an unspoken of dimension that is yet to be discovered..perhaps never will and hence immensely seductive and mysterious)

( Story of Mahadevyakka from 'An A.K Ramanujan story')
Posted by Maitreyee Bhattacharjee Chowdhury at 10:06 PM 2 comments:

A bit of Jasmine 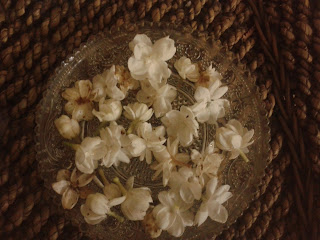 It would rain tonight,
the winds had whispered-
The Jasmine by my window
shook in agreement.
A white canopy covered the brown earth,
as I greedily picked.

The rains they fell..
I sat a little apart
and slowly,
became their smell.

Posted by Maitreyee Bhattacharjee Chowdhury at 10:11 AM 4 comments: