I shall not bake a cake, wear a new dress and dance..because a girl in Delhi lies with her intestines ripped open

In Peter Brook's version of the Mahabharata, when the lake questions Yudhishtira, he asks, 'Why do men revolt?' and a worn out Yudhishtira answer's 'To find beauty, either in life or in death.' the revolts that are going on in the Indian capital( New delhi by numerous students are perhaps just that, in spite of all the ugliness, it is an attempt to find beauty for one woman in life. A woman who has been raped by monsters and left on the streets to die..The lake further questions Yudhishtira, who is torn apart and hopeless at seeing the dead bodies of his brothers. He is asked, 'What for each of us is inevitable?' A half dead Yudhishtira, amazingly smiles a little, as if full of the promise of love and says, 'Happiness'.
Even though I am very much aware and full of admiration of the power of Social media and its relevance in our lives, I cannot but somehow participate in the spirit of the season..because in my mind the spirit of the season has been raped in the past few days, by all the heinous incidents that we have been a witness too. Whether in the killing of the innocent children who were gunned down a few days ago, or the incident of the Delhi woman, who was shamelessly and mercilessly raped by so many men and left to die. Even as my family gathers around me, I am tempted to click pictures, put on a new dress, bake a cake, do out for a dance and party till the wee hours. But I will perhaps not do any of that. Because even as I celebrate a quiet Christmas eve with the family, I shall have in my mind thoughts of the many college kids, who brave the cold and protest for the dignity of one woman, a woman who's intestines were ripped apart and who lies tremendously sick. If festivities are about the spirit of sharing and caring...let's never stop caring.

The humiliation of being the 'weaker sex'

Every time a rape case happens, people are agitated..the police are questioned on their inactive-ness, etc etc and then most of it is again conveniently forgotten till the next girl is raped somewhere.. Immediate police action, stringent rules and severe punishment are necessary as much as it is necessary to change the attitude of people.

Far too many men in India and outside also grow up to a thought process that they can say and do anything to a woman and get away with it..be it in the corporate world, amongst colleagues in small and big offices or public places.

There are so many, so called gentlemen, who are erudite and have all the qualities of a decent man, but many a times when it comes to talking about women with other men even publicly, its just about 'some random chick' kind of attitude. The weaker sex, are of course meant to sprout nice flowery things and are largely perhaps of no great consequence when it comes to deciding important matters or taking decisions. The only women such a man probably considers his equal is one who not only imbibes masculine traits( In terms of dressing like a man and not feminine), sprouting language like men do, backslapping men and those who have financial control over their future or careers.

Women who want to be recognized by men, and are at the top of things especially in sectors where there is a lot of male dominance( like Banking, real estate, etc) also strangely feel the need to be one of the boys in order to be accepted.

Any rape begins with the intent to humiliate apart from the physicality, part of it, allied with the knowledge that they can get away with it both in terms of physical strength and laws that govern the country. 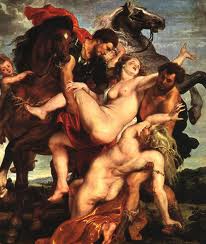 Women on the other hand,(most of them and esp Indians) have been taught as children to adjust to the whims , fancies and temperament of men. Their upbringing does not naturally make them believe that they can hit/rape/shout at men and get away with it. None of which is of course desired in either sex.

I have plenty of friends who are male, extremely courteous and sensitive not only of the manner in which they behave with women, but also how they regard a woman in her absence. It is also true that when a girl is raped, any kind of action and strategic decision that would be taken to punish these offenders would be done more efficiently by men perhaps. As a child if a mother does not teach her son that hitting your sister and getting away with it is not okay, rape shall perhaps continue till the day the mindsets are changed and the laws too. As a mother, if you have not given your son a tight slap, every time he tries to make a woman feel low, you have bred a rapist perhaps.

What can I say that hasn't been said before, just that I'm a bit numb now. I have a daughter and I fear for her, I fear for myself and am angry that the way I live my life is dictated by these morons. It is just the tiny hope that saying it again and again will teach a certain section of men that certain things are not acceptable & that we shall NOT continue to live without a fight, if it comes to that & it will come to that perhaps, we shall fight, not for the pain of being raped, but for the humiliation of being treated the weaker sex.

( Picture from the Internet)
Posted by Maitreyee Bhattacharjee Chowdhury at 8:57 PM 7 comments:

For the love of the land 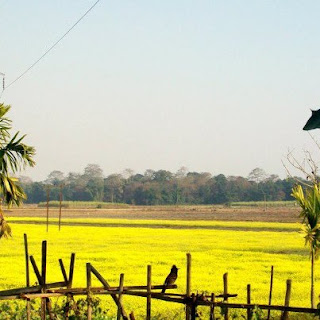 The month of December, is always a beautiful one. As a child, this was a busy time for us..the Potato wedges had been planted and the green little leaves just sprouting...in another beautifully laid horizontal bed, Cauliflowers, would just start sprouting. Since there was no manure apart from Cow dung, the Cauliflowers would be in different disoriented shapes, some small, some really tiny and some just about average..the real fun was however in digging the potatoes when the plant died..it was a family event, with a great rush to see, who could dig out the maximum number of potatoes. With large gardens, we grew potatoes that would sustain us for months.

We used little unused circular Graph sheets to make little caps to protect the small cabbage or Cauliflower saplings, the end of each secured with little sticks broken off the twigs, lying around the Mango tree. This was so that the plants were not eaten by the likes of the little Bulbul bird perched on the fence here. Assam has plenty of Bulbuls and you'll see them restlessly twitching their tails here and there on many a fence or philosophically watching the winds...

Pearl S Buck in her book, 'The Good Earth' wrote,'Thus Spring wore on again and again and vaguely and more vaguely as these years passed he felt it coming. But still one thing remained to him and it was his love for his land. He had gone away from it and he had set up his house in a town and he was rich. But his roots were in his land and although he forgot it for many months altogether, when Spring came each year he must go out on to the land....When he woke in the dawn he went out and with his trembling hands he reached and plucked a bit of a budding Willow and a spray of Peach bloom and held them all day in his hand.'

Anyone who has touched the earth, caressed it and molded it, grown and given life through it..is perhaps transformed for life..Of late the call of my land has been persistent..you can perhaps take the person out of the land, but never the land out of the person.

Reading and not literary festivals 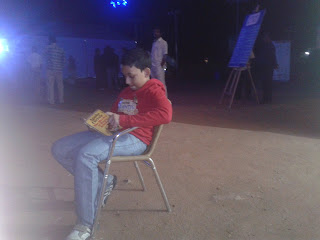 Was at the Bangalore Literature Festival yesterday. A lot of everything was happening, some were just catching up with their friends, some made half hearted attempts at understanding Gulzar's soft tones, some were chasing tea & coffee, others were running around an impending Chetan Bhagat..in a quiet corner sat this little boy, with his Agatha Christie. If literary festivals are about the love of reading and imbibing that culture and spreading the message through an action, there could have been none that was better.

Before clicking I asked him, 'May I have a picture?' He nodded his head, in faint irritation at being disturbed and went back to his reading..while the mikes blared..little masters are born perhaps in some such little corners.
Posted by Maitreyee Bhattacharjee Chowdhury at 10:01 AM 2 comments: