Trying to find oneself through Dance, Masks and Theyyam- Stranger in my own country 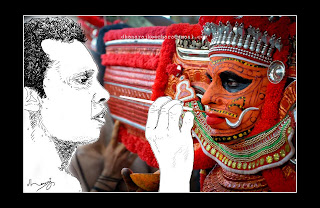 Among st all the states in the Southern India, Kerala as always fascinated me..in different ways and in different directions. I was in Kerala in the early 90 s..did most of the touristy things..went back again in early 2000 and then again about 2 years back.

On one of these trips I witnessed the 'Theyyam'..perhaps one of the most well preserved dances in these regions. The energy at such a dance recital is to be seen to be believed. The dancer is a strange combination of masks, garish costumes, armor, flowers, masks and paints. There is a kind of sacred frenzy about the dancer. One has the feeling of theater, play and dance all being rolled into one.

There is meticulous make up, the process where the dancer slowly becomes the character and manifests himself into a particular form. Most of the masks are different and as elaborate. The dance gains momentum once the dancer is on stage and watching the dance one feels his transformation from the ordinary mortal to God, to the character he plays.

As I sat watching, it was night, the evening slowly enfolding itself. People begin to fill in a makeshift stage. There is the heady fragrance of Jasmine, sometimes a bit too heady for me. Men in starched white dhotis surround me. As if after great thought, suddenly they smile and one is in raptures. Often I am considered French, why, I have no understanding. Everyone seems to settle down at their own pace and they seem to understand that things will settle in its own time..here there is no time..everything is fluid. Little children try and clamber up on the stage, mothers laugh and pull them down, men fan their dhotis, there is a general bonhomie. I am the stranger, only if I chose to be one.

I remember wondering if this was dance or a reminder of rhythmic movements. It is something that one has a feel has been untouched by time and its changes. There is terrifying melancholy in those painted eyes, even anger sometimes in expression. The dance is supposed to bring alive myths and some of the most hallowed traditions from ancient scripture..I wonder which ones..but after a while actually it really does not matter which..one is so taken up by the energy of it all and one reaches a space where you believe what the dancer wants you to believe.

The fluidity of the dance seems to overtake the fluidity of the changes. In the mask, the dancer becomes someone who he is not and also who he is trying to find..the present becomes ancient..the drum beats, the mask, the motions, all seem small parts of a magnificent whole. I sometimes recognize the roles, he plays, sometimes the myths, the ancient stories portrayed. Somewhere down the line, the dancer overcomes the dance..and one is left with the overwhelming beat of the drums and then the peace of resounding silence, where the dancer looks through you and seems to see your inner thoughts, in that moment time stands still.

The diary of a common woman 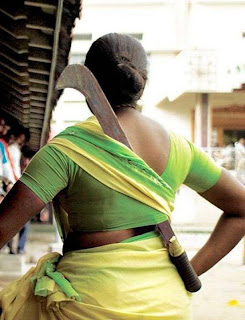 I am a common woman, a point of view, a stumbling belief and some bitter faith in humanity are things that seem to linger on in me..kill me for that if you will and I shall still remain an ordinary, opinionated woman. Just like some of you guys, with inner demons, I deal with my history, chemistry if you like, with angels in the head screaming at the demons to keep peace & I emerge with some kind of de-coctioned form of God brewed in my own incoherent beliefs. I am pally with my God and with my demons too, I flaunt my simplistic opinions, the occasional tragedy and the calm beneath the alarm and on some day s I'm not on speaking terms with what the world calls a God for the lack of a better term perhaps? There are days, when I am a dreamer..an unskilled and incapable one at that, of which nothing comes, nothing becomes and still one plods at it. I am refuge, in convenient reason, the warm sun after a midnight's churning..a Beatnik gone horribly wrong, a misprogrammed radio with kathak and Odissi in tune to rock & roll..I am emotions rolled into a high performance heart..the fool who is tired with the mind games and sulks in a corner only to be pulled into the warmth of a smile. I am best locked in a closet like a mad man rummaging through another s drawers in search of an invisible love letter that never was written on paper but remained in the heart..I thump on the closet door, find it shut and grow quiet in sudden fits of peace. I am the fool, the woman who tried and never gave up, like the woman who hung from another's ceiling in another closeted door..I am the chameleon, Karma had decided to have a fling with, got bored and designed and walked away into the 'roses are red hue'..a cashless poet, writing nonsense poetry..for the silences that do not speak, for your sorrow and mine too, the chameleon who grew colors or died..the cashless, emotional fool who wrote long stuff for people who cared and those who didn't, who learnt no lessons, never the ones that mattered at least..I am Ms wonderful..filled in a bag full of posey s the scent of which I detest.. in a room full of good behavior, I am the smirk who wishes to kick aside good manners and get drunk...I am a bag full of mis-conceptions, the woman with a smile that you might just have picked up and begun to read..a howling wolf from lonely shores..singing lullaby s to decent children on decent days. I am the drunk, the simple woman , with simple needs, the fugitive with the need to escape..the warm hearted fool..the young man's stupidity, an elderly's smile..short sighted, mad and incomplete..I am all of you and yet none..I am trying & not-trying too.

Goodness, you're such a blind alley..the latest slang in town.

( Picture from Google)
Posted by Maitreyee Bhattacharjee Chowdhury at 12:19 AM 7 comments: