Posted by Maitreyee Bhattacharjee Chowdhury at 6:59 AM No comments:

The Blue bell by my window,

The little Magnolia, the giggling forget me nots..

They were there before..yet today they bloom..

As a little petal curls its fragrance around me,

I ask where were U?

It says.. was in the garden, 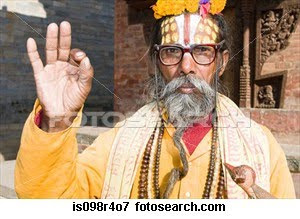 In the land of Sanyasis can Baba s be far behind, nah not really. In the land that has successfully exported software guys, Baba s are a lucrative lot, who have granted immediate global passport to words like Karma, Nirvana, OM..the list is practically endless. To the Indian who stays put in India, the foreign fascination for Na-ma-s-the! Is rather amusing, but what the heck, its India shining after all or so the papers say. Talk to foreigners and they are zapped by philosophies that range from OM to the Oming from the Yoga to Ayurveda, its all exotic and ooh lala time.


While talking to an older friend of mine, he updates me on to the latest gossip on babadom. Amidst talk of retirement plans and benefits I am informed by my rather in your face (like it-laugh it) friend, I’m headed towards babadom. What Dom I ask rather innocently, “arre yaar samjha kar”, it’s the latest fad. You become a Baba and you have the world at your feet plus the moolah raking in. He goes on to talk about hugging babas and their likes, with instant Nirvana services! In an age that sells almost everything instant, from sex to noodles that was but expected I guess. Rather seriously I asked this friend O’ mine, so what exactly are your plans? He says again (the same face mind you) its all in the plan babes, I’m not taking the risk of hugging people you know, what with these confused researchers and AIDS. You never know when they might zap you and say hugging leads to AIDS so am going to be far from it..I shall turn into Winku baba! Jai ho Winku Baba I encore.

Laughs aside the recent influx of Indian philosophers -sadhus whatever you call them is astonishing. To top it all you now have these people fighting amongst themselves, be it the print or the electronic media you have now the fight of the lords. Lord help the go- betweens and the followers who are but mere spectators to these heavenly duels and it’s not long before, they follow the multi party democracy system we have and join hands in their mutual growth. In this rather multifarious growth of Baba s, you have their disciples making everything from ashrams to providing the Benz for such people..depending on of course who’s TRP s are the season’s best!”

Why do we have to be Baba dependent I wonder, why do we need to worship them? At a recent so called ‘satsang party’ in my apartment, I was singled out since I refused to be a part of the Puja that involved giving flowers and showing incense to the portrait of Sri Sri Ravi Shankar. I simply didn’t see the reason why I should worship another human being. In case someone is a higher soul, I might listen to his discourse, admire him and go home, thank you very much. There are plenty of others who derive a lot of peace and spiritual satisfaction from these discourses too, completely acceptable, but let them remain humans, lets not make them Godlike or perhaps un-Godlike, for too much adulation makes for un-Godliness of what probably started off a God like career path!

Philosophy is something that comes easily to me and so does loving, in loving people in and around me I need no one to teach me nor to imbibe Baba like qualities or to become a half God and expect to be worshipped.

Email ThisBlogThis!Share to TwitterShare to FacebookShare to Pinterest
Labels: Ayurveda, Babas, NRIs, Sanyasis, Yoga
Posted by Maitreyee Bhattacharjee Chowdhury at 4:21 AM No comments:

If you are a 94.3 Radio one listener, you've probably heard of Ghanta Singh, cause this one man mania can't be missed. So whats so great about Ghanta Singh one might ask...well the name for starters!! Ever heard of a name as cool as that ..nah not since Phoolan of the Devi types ( who on blooming when on a bling bling bloom oops boom boom spree killing people) Oh well the comparisons are many Ghanta Singh manages to kill people too, but so effectively that they aren't even aware of it...ah such finesse I like. So what does this gent do, if you please well he pops up randomly once in a while & irritates people..seriously that's his Job! Now ain't that cool.. being paid for irritating people. Hearing Ghanta Singh one is reminded of Paresh Rawal in his crazy character in 'Judaai'..full of odd questions both, to the point of driving one crazy... Like most of the best comedians Ghanta Singh scores because of the matter of fact way in which he conducts himself. He conducts himself rather seriously and asks the silliest of questions, to professionals most of whom seem to be answering his silly questions with the utmost patience most front desk jobs entail.

At times, one can't but wonder why not one professional gives this gent a dose of his own medicine and out talks his silliness with more silliness that bores even Ghanta Singh..wouldn't that be great..absolute I'd say..Imagine Ghanta Singh being pissed off by a caller..jodi made in heaven I'd say :) Apart from his crazy questions, what makes Ghanta Singh attractive is his voice..the sleepish non fussy voice..relentless in his pursuit of madness with the occasional mumbling when his absolute madness threatens to cut short a conversation, the gent is intelligent enough not to broadcast it too loud & make a mess of the conversation before it lasts its natural delightful death. A typical example of the Ghanta Singh brand of humour is when he calls up a car dealer and asks about the winter offer on cars & what is the best time and season to buy cars since the company has a WINTER offer!!

To most of his fans, Ghanta Singh brings forth a moment of inhibited laugh in the mundane-ness of day to day life and that is saying a lot..Jai ho Ghanta Singh ;)

Posted by Maitreyee Bhattacharjee Chowdhury at 12:12 AM No comments: